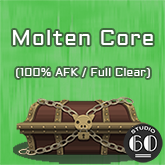 This product is now only available to new customers as part of the "Raid Studio: Retro Bundle"﻿.
It will still be maintained through the entire Legion lifecycle for current owners.


All your Molten Core Needs fulfilled in one profile! - Reduced minimum level to 80
- Alliance characters will no longer use guild cloaks to get to Stormwind, when they are already there
- Added additional safeguards to Shattrath portal usage

- Fixed travel in outland zones not connected to the continent itself