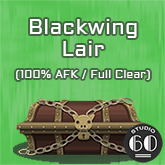 This product is now only available to new customers as part of the "Raid Studio: Retro Bundle"﻿.
It will still be maintained through the entire Legion lifecycle for current owners.
All your Blackwing Lair needs fulfilled in one profile! ATTENTION: THIS PRODUCT STILL NEEDS A LOT OF WORK DUE TO THE HB3 RELEASE
- Razorgore encounter has been completely rewritten
- Updated loot fallbacks for all encounters
- Added pull fallback for Flamegor
- Fixed quest behavior for "Head of Nefarian" now that drop quests are automatically accepted
- The Head of Nefarian quest is now turned in at High Overlord Saurfang or King Anduin Wrynn
- (Experimental) Added avoidance for the first two alchemy lab tables after Broodlord Lashlayer

Blackwing Lair
- Fixed a breaking typo in the Razorgore profile