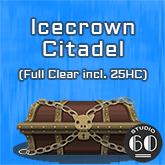 ﻿﻿﻿﻿﻿This product is now only available to new customers as part of the "Raid Studio: Retro Bundle"﻿.
It will still be maintained through the entire Legion lifecycle for current owners.All your Icecrown Citadel Needs fulfilled in one profile! * Full Clear in regards to your character's capabilities. ICC does require a certain DPS to be beatable.
Without the necessary healing output, the Valithria encounter can also not be completed..

2 total
ex***1
ok profile, quite a lot of bugs still in this profile. Character often dies and cant fly back to dungeon. Most of my toons are ilvl 650+.
Te***s
Works great, I run this on a dozen lvl 100 alts farming for Invincible. Haven't gotten it yet but that's not the profile's fault :)

- Fixed Lightning Bolt for Shamans on the Lich King encounter

- Festergut: Characters will now unlock the teleporter before trying to do a vendor run